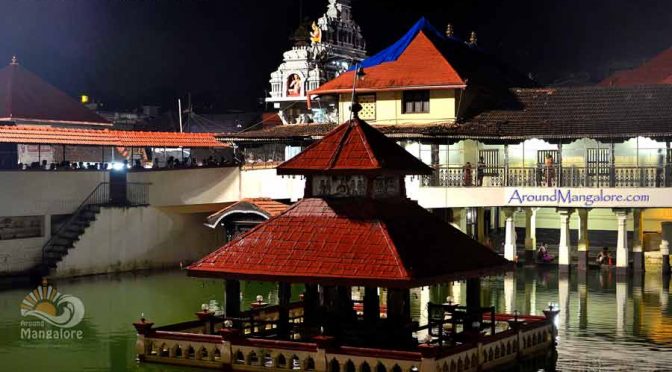 The Krishna Matha was founded by the Vaishnavite saint Shri Madhwacharya in the 13th century. He was the founder of the Dvaita school of Vedanta. It is believed that Madhwacharya found the murti of SriKrishna in a large ball of gopichandana.

As told by Sri Madhwacharya in his TANTRASARA SANGRAHA the murti is placed Pashchimabhimukha. All the other murtis in other Ashta mutts are facing Western side as well. Once Kanakadasa, a pious worshipper and devotee of Lord Krishna, was staying in a makeshift hermitage in front of Krishna mutt. There was an earthquake in the night and the outer temple wall cracked such a way that there was a wide enough opening for Kanakadasa to have darshana of the murti. Till today, devotees still worship Lord Krishna by praying through the same window where kanakadasa was seeing the offerings/Pooja from outside.It is known as Kanakanakhindi, and is decorated by an arch named after him. A statue has also been erected. A similar window covers the immediate front of the murti and is called Navagraha kindi. It is often mistaken to be Kanakana kindi.

© 2016, aroundmangalore.com. All rights reserved. You may read the original content in the context in which it is published (at this web address). No other copying or use is permitted without written agreement from AroundMangalore.com

Zoom Car – Use the Discount Code to get 15% off. Conditions Apply